The Week Before MIPCOM 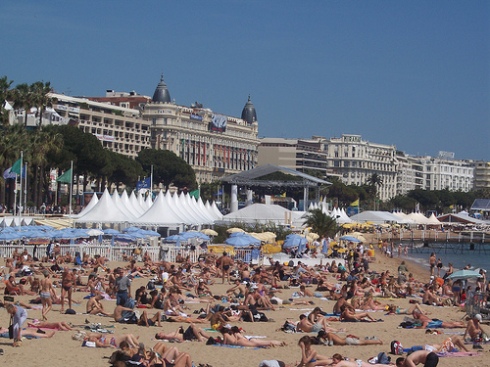 No, this isn’t the MIPCOM market.

You’d think that a week before leaving for Cannes – the fabled town associated with movie stars and red carpets – would be full of excitement and anticipation. Well, perhaps for most people.

For those TV producers attending MIPCOM (yes, that includes those who make cartoons), it’s a stressful cocktail of preparing pitch and sales materials, rushing the final screeners, finalising insane meeting schedules, and begging for a 10-minute meeting with that one buyer that never seems to have an open slot.

Many local and indeed regional (Asian) animation companies have probably heard of MIPCOM, but aren’t quite sure if it’s worth attending or what to expect from it if one does make that long trip to the famous city on the French Riveria. Perfectly understandable, since it’s rather expensive to begin with. A trip for one person (depending on where in Asia you’re from) could cost anywhere from US$2000-2500, including flight, accommodation and entry pass. Much more if you want to have a booth. And food in Cannes in general is by no means cheap, as one could imagine. Prices are even more ridiculous inside the market premises. It’s like they’ve got their own little country in there. All adds up to a rather pricey week in the south of France.

But if you’re in the TV content business, looking to work with global partners and reach out to the international market, and have never been to MIPCOM (or MIPTV in April), you need some proper soul-searching. Fact is if you’re serious about being an international content player, MIPCOM probably provides the best acid test as to where you are in the pecking order, and where you stand among hundreds of companies all gunning for the same spot on that broadcast belt. It’s also the ideal (if rather heartless) setting for one to get a much-needed update on the business realities facing producers around the world. Yes, lest we forget, it’s still a business, even for cartoons.

Few things an Asian animation studio (or any studio) might pick up upon its first time at the market:

1. A lot of shows feel exactly like the ‘hit show’ you’re developing, except they look better (or worse, but somehow still have bigger names attached).

2. There’s an insane amount of creative genius and animation talents around the world… and also a lot of crap.

3. EVERYONE looks for comedy. Are you a funny Asian?

4. Money talks. Most of the time. How much are you bringing to the table?

5. It’s a members’ club, and it take more then a thick skin and talent to break in.

6. People are looking to Asia for funding, yet it still has a stigma as an outpost for cheap animation services.

The above might be generalisations, but I think most of my peers would agree that they hold a fair amount of truth.

It’d be interesting to check out the temperature of the market this time  – what’s the mood, what people are looking for, what’s hot and what’s trendy. Chances are, not a whole lot have changed from 12 month ago, even if people do say differently. Folks would still be looking for the next big hit (there really hasn’t been a bona fide one since Spongebob), wanting to see something different yet always going back to the tried and tested, and continually ranting about multi-platform, 360-degrees content (even though profits still seem to be allergic to such stuff). That’s part of the dysfunction and beauty and frustration and joy of the animation industry, love it or hate it.

I’ll be covering MIPCOM – hopefully a day-by-day account (depends on how much of me is left after being chewed and spit out by buyers daily) to give an insight into life at the market and observations (as usual from an Asian studio’s perspective). Hopefully it’ll give readers, especially those who only have a vague impression of the event and/or are thinking of attending for the first time, a glimpse into the mythic phenomenon that is MIPCOM.

Leave a comment | posted in Markets and Shows, Uncategorized

This one really deserved a proper party, and being the studio’s FIRST ever animated series, it was that much more special after a herculean 26 half hours’ of production that translated into almost 3 years of sweat and tears (some laughter thrown in for good measure) involving partners from Singapore, US, Canada, Hong Kong and Shanghai.

Not that we’re done with Nanoboy and his Nanosquad any time soon, what with new extensions into e-publishing and additional animated content in the works. 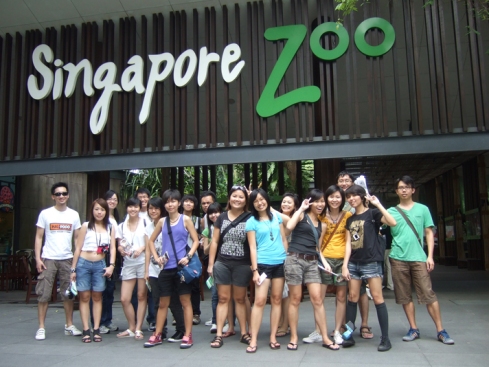 So it was supposed to be a treasure hunt-type game, where teams of 2 run around the zoo to decipher clues to 10 animals and bring back their heads – photo-form, that is. Which is all fine, except on the list were a donkey and a camel, and there were NO such animals in the zoo. Not that day anyway.

In the end, after some  chaos and a minor uprising of sorts (all good-natured), particularly towards a haplessly defensive James the game master, all was good and forgiven. The group then head to the Night Safari next door for a well-earned dinner and beer. It might have felt more fitting to go with Tiger beer, given the surroundings, but we went for Chang beer instead. Well, it still had an elephant on the label. 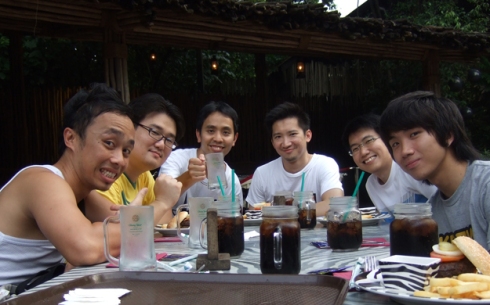 Coming from Singapore and arriving in another country, I’m seldom fazed by how hot the weather is. But Taipei did me in. 6 days of 35 °C slow cooking wasn’t the most fun, but the guys at Coolframes Digiworks, along with other fine folks, made it more than bearable. 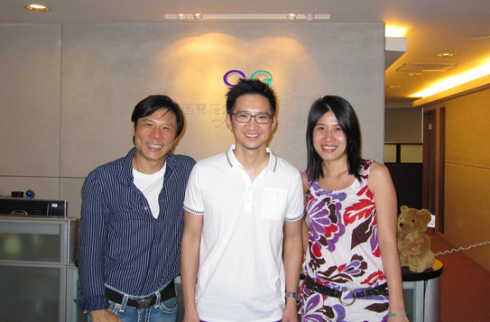 Oh, and a swanky boutique hotel never hurts. Taipei’s got whole bunch of them so I’m definitely planning to check out a few more in the future.

Remote toilet controls. Does everything except clean you up.

Singaporean Chinese and Taiwanese aren’t that different, be it in the way we talk, dress, or just lifestyle in general. Personally, I think the Taiwanese just edge it when it comes to having a real zest for life and just being awesome hosts, be it at a company or pub.

Liwei and Brenda, heating it up at Shilin Night Market. Place was a furnace.

The Coolframes guys are working hard on the trailer for the new show, and it’s great being able to just sit down with the team to go through it shot-by-shot, addressing the performance markers as production starts to kick into high gear on both sides to meet the deadline for MIPCOM next month. As a first collaboration, I can’t ask for a more dedicated team who also are just a great bunch of people. 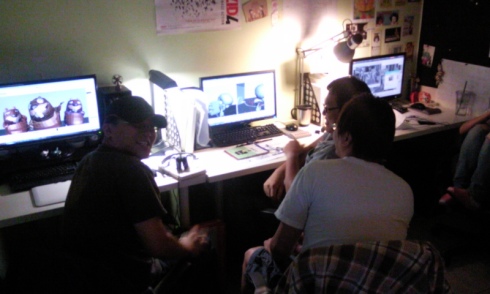 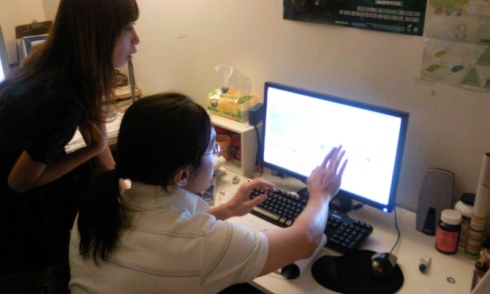 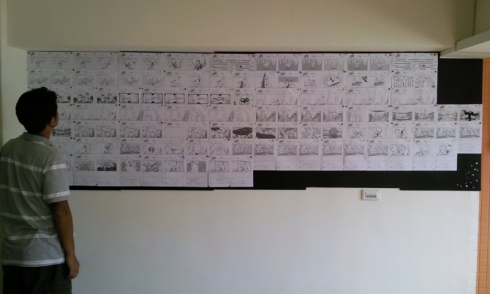 Not that there wasn’t time for some R&R, despite some of the folks having to be back in the studio over the weekend. We kept it fairly low-key this time – dinner at China White, drinks at MOD Bar, couple of dart sessions and KTV. But I’m making it a point to come back with less work on my mind and get down with the partying. One suspects there aren’t many better places in Asia to get royally sloshed. 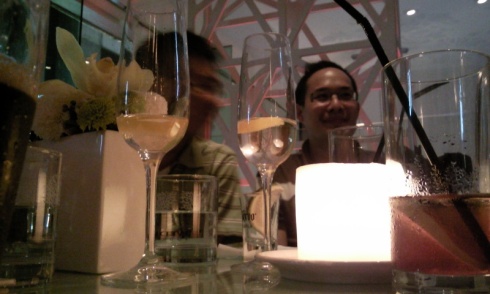 Hanging at China White – a restaurant that turns into a salsa club after dinner.

Drink darting. I’d have failed a breathalyzer test. Got creamed by Jason.

The cornerstone of every nutritious KTV meal.

Matea, Annie and some random guy who ruins pictures of gorgeous women.

And I managed to catch the fabled Pixar exhibit that I didn’t even know was on in Taipei!