That’s not a mask of Bella. It’s actually her.

Apparently there was a PINK day in the studio recently. Need to work on our internal communications, guys… Or maybe no one wanted to see me in pink (which would be understandable). 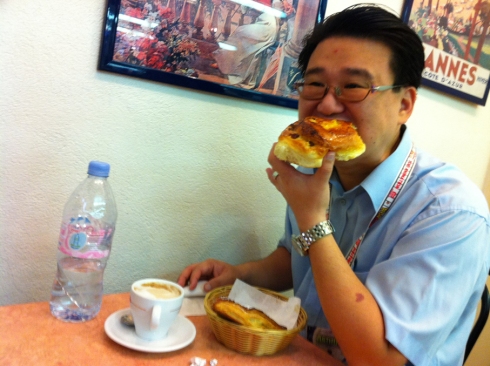 It’s a funny feeling in the stomach when talking about food in Cannes. Let’s get this straight – food here, for the most part, is always good if not fantastic. Walk into any self-respecting restaurants (complete with rude waiters), and chances are you’ll have a great meal – and a slightly charred wallet. A dinner could easily set you back 40-50 euros (with dessert and maybe a glass of wine, or a bottle of sparkling water), while a decent working lunch tend to hover around 25-30 euros at least. There are cheaper options that are not necessarily terrible, but still it’s a far, far cry from the S$5 lunch we are used to back home on a daily basis.

But it’s pointless to compare food prices here. Frankly I’d pay top dollar for some decent Chinese food in Cannes, and there really isn’t any. There’s maybe like, one restaurant that serves up some decent Chinese fare, but it’s nothing that’d blow the mind of a born and bred Singaporean Chinese brought up on old-school Tze Cha and authentic Hong Kong dim sum.

What you end up having for meals is mostly standard western fare, and the unavoidable pastas and pizzas. Again, they are usually very good, but still – it ain’t the same as home food. Too much gluten, I reckon.

What I do really appreciate are the morning breakfasts, sitting in a little cafe or on the street in the crisp morning air, chomping on sumptuous pastries and perfectly baked croissants, and washing it all down with freshly squeezed OJ and a satisfying cup of coffee that kicks you in for the day ahead. Breakfast is always my favourite part of the day here. 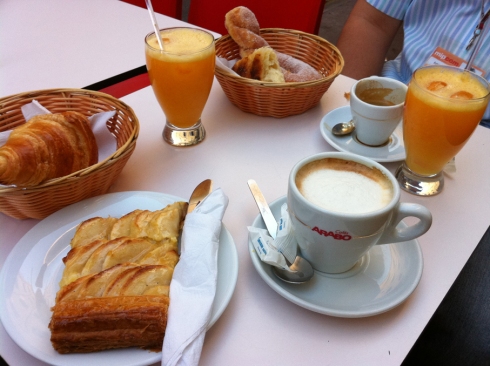 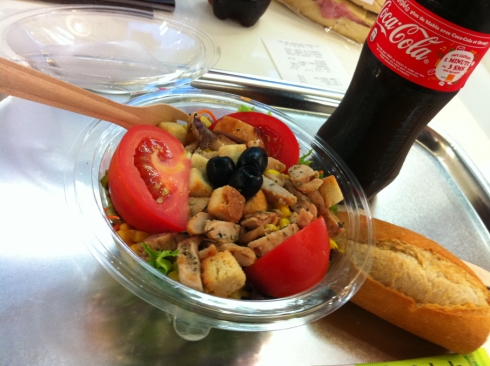 Many Asians I know at the market always bring along instant cup noodles. Some even have them as meals religiously, not being used to western food. I’ve never done that, only because I’ve stopped eating instant noodles for years (it’s poison, people!). When push comes to shove, there’s always the Golden Arches to fall back on. It’s still the quickest and cheapest ticket around for a meal, and you always know what you’re getting.

And it’s true what Vincent says in Pulp Fiction – the French dip their fries in mayonnaise instead of ketchup.

A Thought on Interns at Scrawl

Ever since Scrawl Studios was founded  8 years ago, we have had interns of all shapes and sizes passing through our door. Some are good, some maybe…could do with a bit more self-motivation.  There have been interns who went the extra mile and others who frankly, we were glad to see the back of. With each batch of interns, we always hope that they can learn something from their short stint here at Scrawl. It can be something as basic as work ethic – being punctual for work; taking responsibility for their actions; discipline when it comes to deadlines etc. What’s important is to understand that working in an animation studio is not a walk in the park and so much depends on the individual intern’s hard work and effort. To quote one of our recent interns: “I am here to solve problems”. He may not yet realise the magnitude of the problems that are about to come, but at least that’s the right attitude.

We’ve also been lucky enough to have many interns with not only the talent and passion but very importantly, the right attitude and work ethic, join the studio later on as full-fledge animators and artists.

Here’s a big THANK YOU to all the interns who have worked at Scrawl all these years and who have contributed to the studio in their own ways!

From Storyboard to Animation 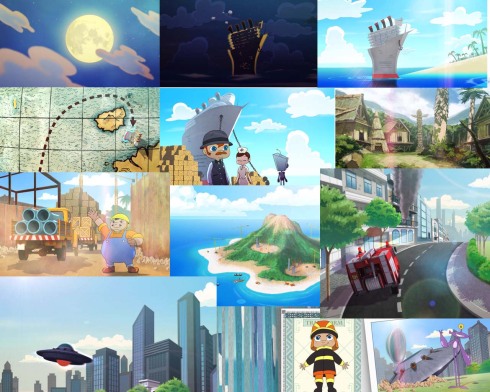 This was a commissioned project we did some time back . The project is for a theme park in China that allows kids to “role play” their dream jobs. We were asked to produce an animation trailer to introduce the concept of the park as well as the mascots themselves. It’s always interesting to see how a static storyboard transform into animation. There’s just something magical about it if you think how it all happens. 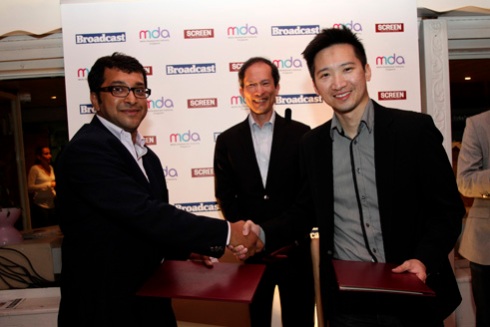 The thing about MOU (Memorandum of Understanding) or MOC (Memorandum of Cooperation) or LOI (Letter of Intent) signing ceremonies are that people usually show up more for the FAD (Food and Drinks).

Not unlike wedding ceremonies, but I might be a bit cynical there.

Most parties at MIPCOM (at least the ones thrown by the MDA) pretty much have one of these photo ops where deals are announced and smiles are flashed incessantly for the cameras, with the hope that some of those pictures make their way to the trade journals and market dailies the morning after (at least for the publicists’ sake).

These scenes are probably more prevalent at parties thrown by government organisations or funding bodies, given the obvious need to show that their funding and support are showing results in the form of multi-million dollar deals.

The food was pretty good this time, but I didn’t have any bites before the signing in the fear that any leftovers between my teeth could show up in the trade magazine pictures. My fear was totally unfounded, as there was apparently little coverage on the signings, much less any pictures. Well, at least the handful of readers of this blog can get a taste of what went on.

Truth is, the whole thing was quite uncomfortable for me – sitting there, signing ‘deals’ and smiling for the cameras, knowing full-well that you stand between a hundred-odd people and their free food and alcoholic beverages.

Besides, anyone in the industry knows that these photo ops are little more than a chance to get the company a few minutes under the spotlight, and the real work starts later on with sober heads working through financials, deal terms, budgets, schedules and production chaos before even a frame of animation is seen on screen a couple of years (or longer) down the road, and hopefully everyone sees a bit of profit before it’s all over.

But all that can wait when alcohol’s free flow… 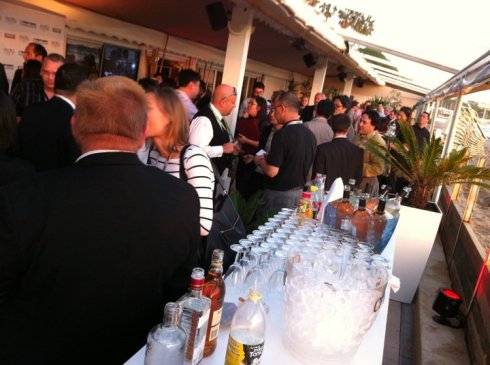 Sunday was pretty rough, given that both Jeong and I had about an hour’s sleep the day before. And Monday morning started at 5am, thanks to the body clock.

It’s a funny feeling on day 1 at the market. You kinda know what to expect, but at the same time – not really. We set off this time with some specific goals in mind, and I think it gave the whole ‘mission’ a bit more focus. There’s the usual pitching and taking pitches of course, but we were looking for certain types of projects, and it drove our approach towards most meetings. 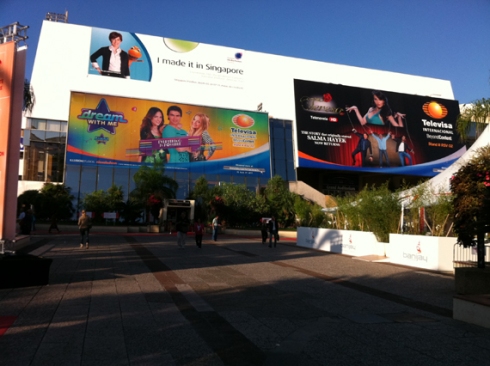 And MIPCOM is ALL about meetings. 20-30 minutes sessions, back-to-back mostly, with either lunch meetings or quick bites in between, from morning till evening and sometimes beyond. Jeong and I tried to cover for each other as needed, since it’s common that meetings overrun or overlap. After so many years, at least we know where the booths are, so running from one meeting to another, sometimes on different floors, usually takes between a couple of minutes at most.  It’s not physically that demanding, but mentally it really wears you down. Time flies though, and before long we’re walking out of the Palais with heavy steps, either heading back to the apartment to drop off out bags or to find some dinner.

In a funny way, attending these markets, often twice a year, gives you an indication of how old you’re getting. Sure, we’re still almost a couple of decades younger than a lot of the people zipping around the market grounds, but the days of hitting the lounges or bars for drinks and stumbling back to the apartment with a buzzing head are clearly over (well, not every night at least). These days, as it is back home, sometimes a nice, satisfying dinner with friends after a hard day’s work is the best tonic.

We came, we got stuck in London for a night because we missed our connection, we survived two of the reportedly worst airports in Europe in a day, we soldiered through 4 days of back-to-back meetings, and we made it home to tell the tale.

MIPCOM started early in October this year. Choon Meng was preoccupied with the slight matter of a second baby, hence it was left to me and Jeong to take this one – my 10th or 11th time in Cannes (I don’t really know for sure anymore).

When our flight from Changi took off almost 45 minutes late, I had a sneaky feeling it’s going to be a tricky transit. We were connecting through Heathrow in the evening, and eventually got in over an hour late. Our fears were founded when just before disembarking, our names were called out over the PA. We were to approach the ground staff, who subsequently told us with no pity at all that we had zero chance of catching our connecting flight to Nice.

So it was night at a airport hotel on a wet and chilly London night. We were more concerned about booking an early flight to Paris, and then on to Nice the next day, where we’ve got a pretty full schedule of meetings lined up already. Fortunately, we were able to make the bookings. Unfortunately, it meant 3 hours’ sleep as we had to be up at 4am to catch the first bus into Heathrow. We barely slept an hour. It didn’t help that the bathroom’s toilet flush didn’t work. 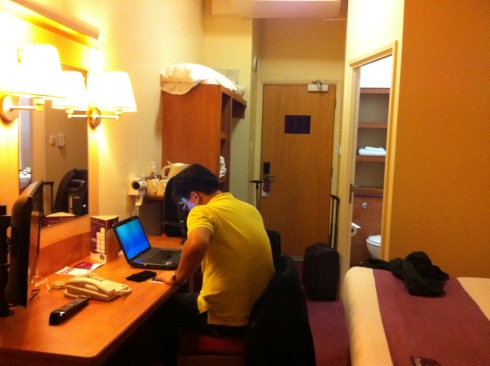 Scrambling to book the first flight into Paris and then Nice.

Waiting for fish and chips. What else we gonna have in London?

We got into Heathrow at 5.15am, seriously zonked out by now. Caught a flight to Paris, laboured through the meat market that is the Charles de Gaulle airport (voted worst in Europe), then on to Nice. 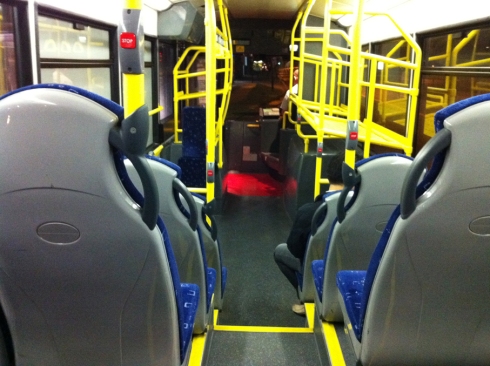 4.45am bus into Heathrow after one hour’s sleep. Delightful. 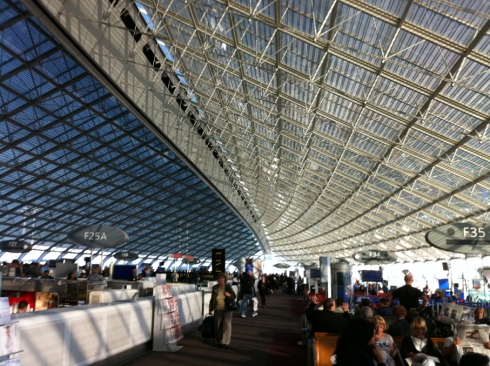 Finally, we arrived in Cannes at 1pm, checked into our apartment, dropped off our bags, and off to our first meeting. 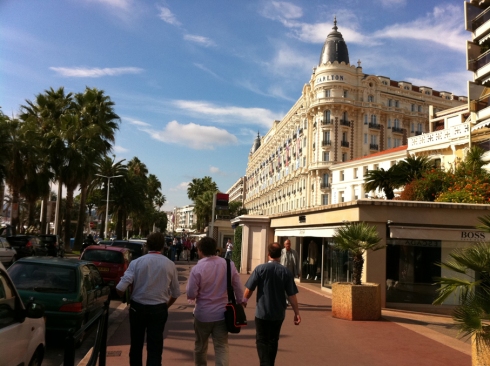 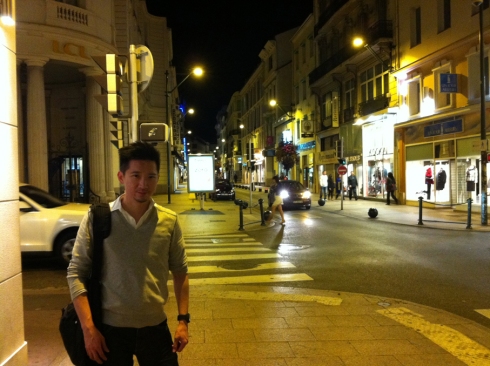 Look out for Part 2.