And so the fabled Pixar exhibition comes to our little island. I visited the same exhibit back in July last year when it was on in Taipei (with a lower entry prices, I should add), and was, unsurprisingly, deeply inspired. The exhibit isn’t so much about how a Pixar movie is made, but how it is conceptualised, designed, storyboarded, and above all, treated with every ounce of care and love even before a single frame is animated. It’s very much about the pre-production process which, including story development and script, takes up to 3 years for each of Pixar’s movie. Naturally, it’s the most important aspect of any of its productions (animation itself typically takes up to a year and a half ), and the exhibit brings this point home in the most resounding fashion.

For a 3D animation studio, almost 90% of the works on display are 2D – drawings, sketches, paintings, colour reels, location designs, and the awesome Artscape – an immersive, wide-screen projection of 2D rendered digital images that gives the viewer the sensation of entering into and exploring the exquisite details of the original artworks of Pixar’s films. This should impress upon those who feel that 3D is the be all and end all (and there are many of those around who often hold the purse strings to film and TV financing) that it’s about the craft of storytelling and art – not the technology, or at least not letting it be driven by technology.

Scrawl is honoured to play a bit part in the exhibit, with a display of some of our modest work alongside the greats, many who inspire our artists daily with their limitless and profound imagination and creativity.

Be sure to pop by the Science Centre to check out this unique and inspiring exhibit. 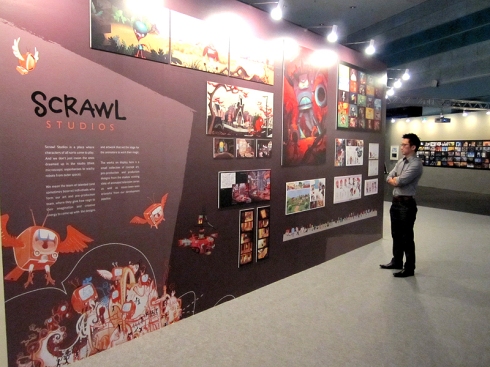 Whatever hair gel Nanoboy’s using these days, it’s got a firmer hold.

.
Nanoboy takes his posse on the road again. Venue is different, but somethings don’t change e.g. Nanoboy and Issac can only appear for 20 minutes, otherwise they run out of oxygen (literally). And he may be a superhero in the Microcosmos, but in the real world this fella could be taken down with a nudge. Hence the multiple ‘assistants’ he needs to get around.

It was a good 2 days of fun, quizzes, games, photo ops and kids screaming in general. Kudos to Adriana and Peihui for running a tight ship over the weekend’s events.

Now we just need to convince one of the girls to cosplay as Corona Jane to complete the team.

Nearly 2 years in the waiting, after its premier in the US and all around Asia, Nanoboy finally takes off on Singapore TV this Saturday 1.30pm on OKTO!

Mervin trying to describe the size of Nanoboy to a tough crowd.
.

The reason we do what we do. Doesn’t hurt if they buy some DVDs too.
.

Nanoboy back in Nov ’08. That hairdo should be illegal.